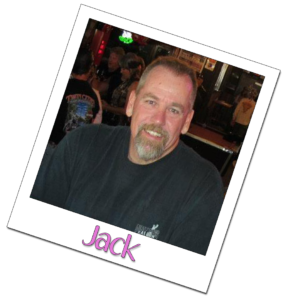 Jack is an Idaho native and moved to Arizona in 1987. In 1991 his life changed forever when he bought a Harley Davidson Fat Boy.

He has been in the food and beverage industry since 1992 and was an Operating Partner in the original Maloney’s Taverns from 1992-2003. He was an active partner in Jilly’s American Grill in Scottsdale and Sapporo’s. Jack had a dream to open his own bar that was biker-friendly, a place like no other in the valley. That dream became a reality in 2003 when The Dirty Dogg Saloon opened for business. He’s created an atmosphere where his employees, as well as the patrons, have become family.

Behind Jack’s rough persona there is a man with a very kind heart. He is extremely supportive of local charities. He and his wife have five rescue dogs and they are always spreading the word of dogs in need of a good home. The Dirty Dogg Saloon has been involved with many charities aside from Bikers for Boobies, including their Charity Golf Tournament, which benefits many local charities from animal rescues to veterans. Jack has been active in Bikers for Boobies since day one.

He is a pillar in the Arizona Riding community and received the Arizona Bike Week Hero award in 2014.

When he’s not out riding, off-roading or hanging with his wife and 5 doggy’s you can also find him at the Dirty Dogg Saloon located in Scottsdale, Arizona

Ways to Support Bikers 4 Boobies
Amazon Smile before you get your shopping on - click this link and confirm (or select) that you want to support Bikers For Boobies.

What is Amazon Smile? Click here to learn more.

How does it work? Click here to learn more.